We rebuilt the NMEA tachometer in a small plastic tube (epoxy filled), containing all the parts needed. The south pole of a magnet passing nearby the front will create the pulses needed to get the speed count (Revolution Per Minute).
The front red LED will light up every time the magnet is passing nearby the tube front, so control and installation will be most easy.
This tachometer probe also has a totalisator counter function. It will keeping count of the amount of pulses (rotations) since its last power up. Application covers propeller axes, engines, machines and other applications. Most rotation speed or count measurements can simply be made with this self contained probe... The NMEA string format and baud rate are user programmable upto 30 characters including count. This can easily be done with any comm program (window terminal or else) also via the output cable or left to the standard output string. For exemple, for 552RPM the standard string will show $RPM552 at 4800B/s.
This 4 leads cable is terminated with an USB-A connector. Use our PC adapter (see below**) and see the speed directly on your PC and test the reaction with the magnet. A small usb to 4 wires adapter is also supplied to connect to your own system.
Power supply will be fed via the 4 leads output cable with +5 to +16Vdc. Same cable will also output RS232 TTL data's at chosen baud rate and string format. The output (Tx) and input(Rx) also used to configure or program the probe, is RS232 TTL (0-5Volt!). So never apply more than 5 Volt at the Tx and Rx wires!
Measuring 5.3x0.85inch (±140x22mm), the tacho is fully waterproof (IP67) and can also work immersed! Filled with epoxy, these probe  is also shock resistant.

Programing of the output string:
1/    Open window terminal or our communication program exe or zip and choose current tachometer port and baud rate to make contact with the probe via an TTL to USB or RS232 adapter. At this point, actual data received from the tachometer should then be visible on screen. If not, make sure program baud rate is corresponding to actual probe baud rate and that the tachometer is powered with 5 volt (see led's).


The string length should have less than 60 charaters. Any unrecognized character or character position will cancel the new string programmation. So the NMEA output string can only be exchanged with a valid one. The new string takes effect immediately and does not need a restart. If the baud rate (b) is changed to a new value, the change will only take effect at next tachometer powerup so you have time to change it in the pc program too..

The standard version is to include to your hardware and does not have rs232 level shifter, so take care not to apply more than 5 volts to the Rx and Tx connection when using positive supply exceeding 5V. However, positive supply can be +5 to +16V. The totalisator can count upto over 4 billions pulses and will restart counting from zero again if overflow. The counter string is standard  $CNTxxxxxx where xxxx show the count. So as seen before above the counter output is only visible if enabled (T)...


There is no much to tell about the installation but one should work carefully.
Pls see the differents small demo movies here...


** When the probe is not to be included in your NMEA installation and that you want to read it directly from a computer, you can use one or these two wired USB serial adapters PL2303HX or FT232RL that we can provide...
They are connected at one side (TTL serial) to the probe and the other side (USB serial) at you computer USB. No need then  to connect any supply adaptor because the probe will take is small power directly from the USB!
They then give you a extra comm port that you can read with your PC application or a communication program like your window Hyper Terminal, our controller program or any other... The tachometer/counter is then powered via the computer USB with less than 20mA.


Previous models here below are obsolete and only shown for reference and service.

This tachometer (middel) is a small PCB (58x19x13mm ) to be added to your hardware. The optical sensor, DB9 RS232 connector and the supply wire are connected to it. This small PCB with microcontroller, also have a CMOS/TTL to RS232 level converter (MAX232) and a supply regulator (78L05).
Output can be directly plugged in the PC RS232 Comm port and any terminal program will show the velocity rate in RPM.
Application covers propeller axes, engines and other applications rotation speed measurements.
The power supply requires a clean 7 to 14VDC (negative on black and positive on red wire). The board battery or a main adapter to 12VDC can be used. 5VDC can also be used after removing the voltage regulator.

CR and LF close the sentence, sent at half a second rate. The tachometer does not require any adjustment and is ready to operate; all wires are already connected.

INFRA RED TACHOMETER SENSOR  (to be connected to the small board above)  Be very careful when installing probes near a moving shaft or any moving device.  Any moving mechanical part is dangerous!

The probes wires can be lengthened according to necessity. The wire thickness is of no particular significance here. Never apply any electric current to the probes and respect the 3 colored wires connection order when adding more sensor cable.

The optical probes are working with a light beam cut at intervals by the moving part attached to the rotating shaft. When working adequately, the sensor red LED will go off each time that the light beam is cuted by the blind.
Mount the probes the way that the infra red light beam is being cut at each revolution. The moving part occulting the cell on each revolution needs to have a width of at least 2,5cm (1inch) to ensure a good reading by high velocity. In fact when far from the center, one half meter or more, the blend will be about 5cm if the expected RPM rate is >5000RPM.

Do not expose or install the optical sensor near a strong light source like fluorescent tube, sunlight and do not place it right next to a light bulb; it would disturb the receiving cell and the reading. Install the sensor in the shadow with its connection as high as possible and keep it dry. Its two red surfaces should remain clean, even if the sensor is paint in order to prevent disturbing light breaking inside when not installed in the shadow. Sensor dimension: 45x90x9mm 2xM6 or less bolts.
For safety, use a piece of rubber for the blind.
We have two interchangable sensors, optical and magnetic. See at bottom for the magnetic sensor, working with a small (south pôle) magnet. See rpmsensor.pdf for more infos on the sensors. 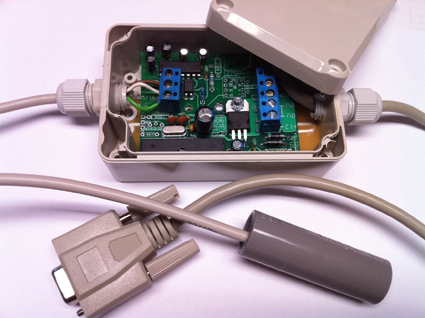 *These very accurate tachos (1/1000) are "in system" programmable through their RS232 link. So any changes, special output string or speed, can be uploaded to them as an update with our free PC program. See rpmsensor.pdf for more details on the sensor choice (magnetic or optical). French/Dutch/English.